The darkly humorous stories are occasionally violent, and often uncomfortable 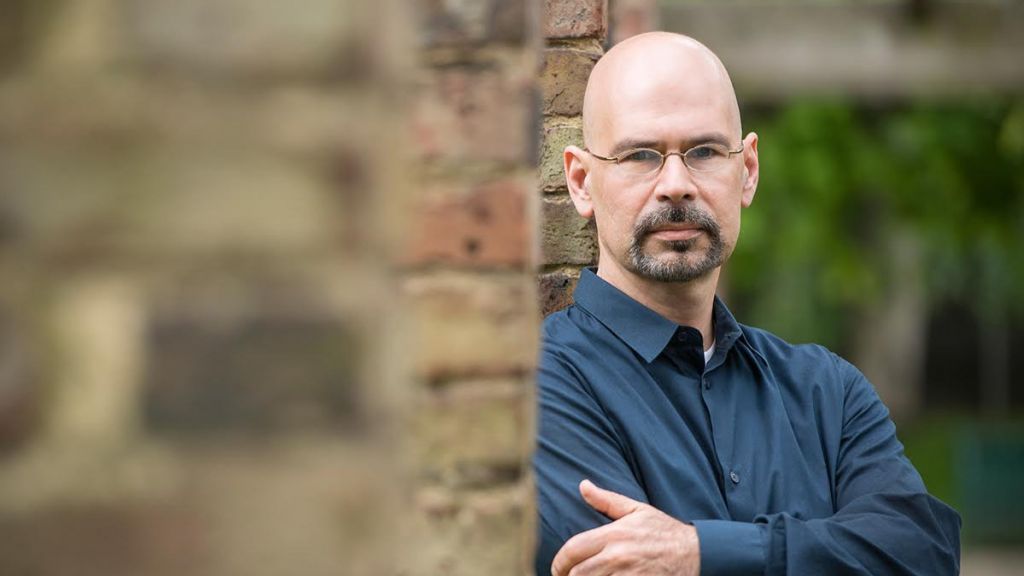 NEW YORK — “Ikeda Yataro’s body was cremated today. May his soul be forever damned. The flames claimed his corpse and his roses — all that was left of the man.”

So opens “Torture by Rose,” the first story in Orlando Ortega-Medina’s debut short story collection “Jerusalem Ablaze: Stories of Love and Other Obsessions.”

Set in present-day Tokyo, it tells the story of Ikeda, a wealthy industrialist and patron of the arts who offers a talented university student the chance to become his sole heir. There are three conditions and should the student violate even one, they would forfeit the inheritance. The student agrees, but soon finds the price too much to bear. But don’t expect a morality lesson from the Jewish author.

“The stories in the book come from below my consciousness. They are to entertain and not leave any kind of message. I think the interesting thing is how people read the stories and what they take away tells a lot about the people reading them. I don’t mind what people come up with as long as they were moved by the story,” Ortega-Medina said, speaking with The Times of Israel from London.

In all, 13 tales lie between the covers of the book and, like “Torture by Rose,” they are not spun from sweetness and light. Rather, the darkly humorous stories are occasionally violent, often uncomfortable, and always populated with characters on a quest to find their place in the world. It’s a quest reflective of the 49-year-old author’s own search for identity.

‘With my more exotic background, I always felt I had an excess of identity’

“I grew up in a fairly homogeneous white Anglo-Saxon neighborhood. With my more exotic background, I always felt I had an excess of identity. I always found I had to be distinguishing myself. I was always having to clarify who I was, to navigate the different strands of my background,” said the Los Angeles-born author who is of Judeo-Spanish descent via Cuba.

Illustrative: An Israeli flag hangs on the wall of the Jewish Community Center in Havana, Cuba. (Serge Attal/Flash90)

The work was inspired by four periods of travel in his life: California, Quebec, Israel and Japan. Ortega-Medina said the Israel stories are the most biographical of the whole collection and are firmly rooted in his experiences and the time he spent searching for himself there.

Both of Ortega-Medina’s parents were born in Cuba, his father’s family originally from Florida, his mother’s family from the Canary Islands. The couple left during the political upheavals of the 1950s. Along with their belongings they packed the hope they would someday return to Cuba.

Growing up with their wish hovering in the corners of his house, coupled with the fact that his parents were not affiliated with any religious denomination, further set the young Ortega-Medina looking for his place in the world. “In a way I found myself searching for identity in my own household. I wasn’t accepting the idea that we’d move back to Cuba. When I was 13 I had a deep interest in my religious heritage. My grandmother was visiting and when I came downstairs she presented me with a kippa and said ‘It’s really sad you’re not a Bar Mitzvah,’” he said.

His grandmother sent him to Israel after he graduated high school, and he also turned to Chabad and the Conservative movement for guidance and spiritual fulfillment.

“An Israel State of Mind” is perhaps the most biographical story in the collection. In it a recent high school graduate from Southern California arrives in Israel to spend a year working on a kibbutz. He hopes to rid himself of his desires; instead he is reunited with the man he loves.

“And by the time the sherut [shared taxi] approached the imposing gates of Kfar Vered, Marc was beginning to feel more optimistic about the whole thing. Perhaps having a good time here at Kfar Vered and connecting with his Jewish heritage were not mutually exclusive propositions,” writes Ortega-Medina in the story.

“The character Marc is the closest to an alter ego I have. I do work out some personal things through him,” he said.

He has long turned to words to work out his own search for self. In elementary school he penned several science fiction, time-travel comic books for himself and a few select friends. He wrote a novel that he set aside, and even tried his hand at a screenplay or two. “Jerusalem Ablaze” has so far received high marks. Kirkus Reviews described his prose as “elegant and potent throughout, with visceral passages bathed in lyricism.” And the Irish News wrote the book is “beautifully wrought, deeply unnerving… Ortega-Medina holds a mirror up to our darkest thoughts and urges — while showing the oneness of the human condition.”

With the positive reviews rolling in Ortega-Medina imagined hosting a dinner for the writers who inspired him.

“I’d surround with Yukio Mishima, Salman Rushdie, Margaret Atwood, John Fowles and Anthony Burgess, and we’d discuss writing over a glass, or three, of wine. No, make that champagne,” he said. “In fact, ‘Torture by Rose’ is an homage to Mishima’s story ‘Swaddling clothes.’ It left a lot of questions for me and I answered them in my story.”

Ortega-Medina studied English Literature at UCLA and then earned a law degree from Southwestern University School of Law. While there he won The National Society of Arts and Letters award for Short Stories.

In 1999 Ortega-Medina moved to Canada with his life partner to protest discriminatory policies in the US against same-sex couples, running his San Francisco law practice from Toronto. He and his partner were among the first same-sex couples to marry at Montreal’s Hotel de Ville in 2005.

“One of the things we really enjoyed when we moved to Canada was that as a couple we were a non-issue. It was more than acceptance; it was as if us being a couple was a non-issue,” he said. After four years in Canada his partner, who hails from a tropical country, broke the news: he was done the nearly six-month-long Canadian winters. Fortunately, an opportunity arose in the UK and the couple moved to London.

With US, Canadian and British citizenship, Ortega-Medina works as an immigration and consular attorney in London, and is managing director of a US corporate immigration practice there.

While the US Supreme Court legalized same sex marriage throughout the nation in 2015, Ortega-Medina said he has no plans to return there. He described his life in London with his husband as “quite settled. We live a stones throw from Kensington Palace and we can literally wave to the royal family as they drive by.”

‘For a lot of people the civil ceremony would have been enough. Standing under a chuppah was an important milestone for us’

Several years ago he and his partner married in a religious ceremony at the West London Synagogue, where they belong and are quite active.

“For a lot of people the civil ceremony would have been enough. Standing under a chuppah was an important milestone for us,” he said.

Many of the stories in “Jerusalem Ablaze” explore life’s imperfections and the fragility of the world. These are themes that come from a somewhat overprotective mother, he said.

“My mother was always very nervous. She worried about whether we would catch a cold and die, or be run over by a car. She worried that anything could happen to us. It made me a bit more daring, a bit more of a risk taker,” he said. “My leaving the US for Canada to reinvent myself and then again to the UK where we didn’t know anybody was risky. And in my writing I take risks.”